How is Machine Learning Improving our Social Media Experience? 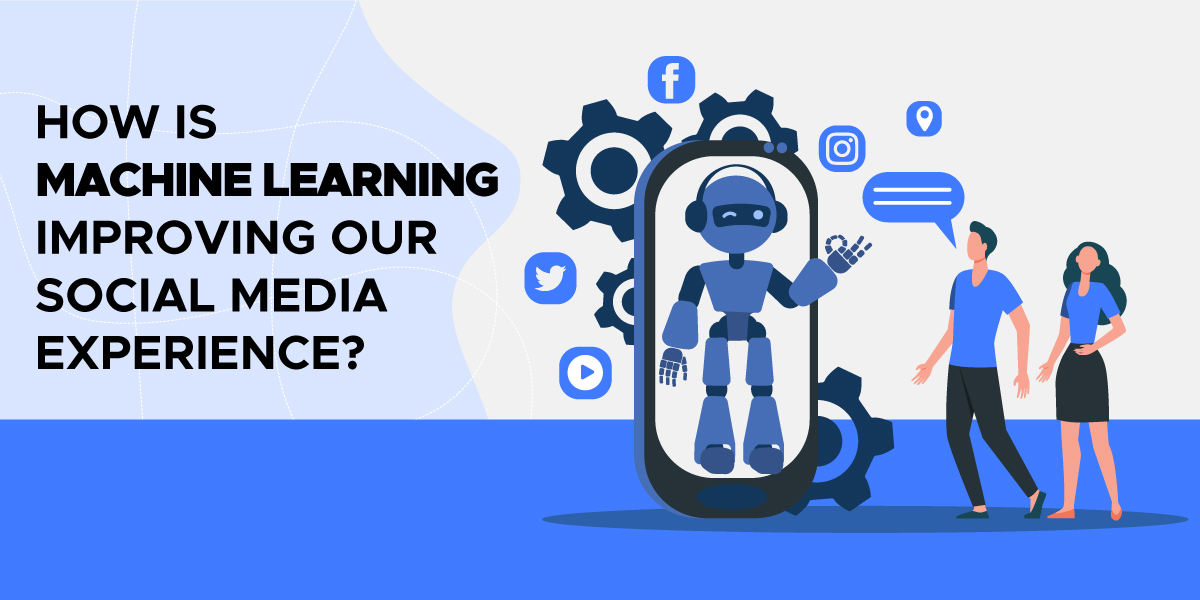 Are you on Instagram? If yes, have you followed Lil Miquela yet? If not, then you could just probably check out her page. The reason you are being asked to do so is that Lil Miquela is no human being.

She is a virtual influencer created using AI by Trevor McFedries and Sara DeCou. Not only she dresses like a human, but she also has a personality like one and behaves like one too. She even supports Black Lives Matter, LGBTQ causes, and reproductive rights. She is even talking about the COVID-19 these days! Lil Miquela is just one of the creations of AI.

There are lots of misconceptions behind what Artificial Intelligence is, which needs to be cleared first. AI is an area of computer science that emphasizes the creation of machines that are intelligent enough to act like humans.

Often people use the terms Machine Learning and Artificial Intelligence interchangeably but in fact, Machine Learning is a subset of AI. It is a branch of AI that is based on the idea that after basic human programming, systems can learn from the large amounts of data that is available, identify patterns and make decisions.

Some people often say that they haven’t come across AI yet and often equate AI and ML with robots. This couldn’t be further from the truth. Each one of us interacts with some or the other form of AI and ML every day. For this discussion let us focus on ML today.

In our daily lives, we come across different forms of ML every time we interact with navigation systems like Google maps which not only show you the way but even predict traffic for you, virtual assistants like Siri that converse with you, chatbots on different websites that help you with your queries and so many more.

Almost every one of us is present on some form of social media and most of us would have missed the obvious instances where we interact with ML on regularly.

You can even find machine learning in social media. Social media is used by millions of users every day and millions of posts and pictures are uploaded daily. Monitoring this kind of data is an impossible task and there isn’t enough manpower to do so.

Businesses are trying their best to leverage the power of social media and are trying to track, analyze, and reach their customers through social media. Without technologies backed by Data Science like Machine Learning, data analytics, and business intelligence, it is impossible to handle the oceans of data that are available so easily today.

You name the social media platform and you will see that each of them has implemented ML to make the user experience better and also to serve their business goals better.

Facebook has implemented ML in several functions to make the platform a much more user-friendly one than earlier. Facebook has employed ML to tackle the enormous problem of fake news and hate speech on its platform.

With people working from home due to the pandemic of COVID-19, Facebook, Twitter and Instagram have all moved to machine learning to remove any form of harmful content. The one problem that machine learning faces is the power to reason like humans.

So, even though social media giants have employed ML for content moderation, none of the content gets removed unless verified by humans. This means that there is still room for error while employing AI and ML.

On Facebook, ML can analyze the content of videos, caption them, and even translate posts in different languages so that people all over the world can access the platform more freely. When users upload photos they are automatically prompted to tag their friends and it happens precisely due to the face recognition technology.

This, however, presents a privacy threat for the future. If Facebook can identify faces of people based on some pictures uploaded on the platform, soon it will possible to point your camera at someone and identify them on Facebook. Facebook also allows users to convert panoramic pictures into 360-degree photos.

Machine learning enables Twitter to drive engagement and show the most relevant tweets in the users feeds at the top which was in reverse chronological order earlier. This is done using algorithms that score thousands of posts for each user.

It has also deployed ML to fight against harmful content and at the beginning of 2017, Twitter used AI to shut down nearly 300,000 accounts that were identified as terrorist accounts.

The platform even uses ML to crop images to make them appear more appealing and it also uses the technology to identify the content of the videos, thereby categorizing them enabling a much easier search.

The other social media platform that is extensively used by people as well as businesses, Instagram is not behind in the use of AI and ML to optimize the user experience and make it a much secure platform.

To be able to correctly recommend relevant stories and posts, it uses “word embedding” to study which words are more likely to appear next to each other and thereby recommend posts based on similar accounts rather than based on content previously watched.

The algorithm even takes into account which posts the user does not like to see and tailors the users’ “Explore” tab accordingly. Businesses leverage Instagram’s use of ML to identify potential influencers and ensure they reach the relevant target groups.

Using ML, Pinterest identifies the subject of images, studies the visual patterns and matches them to other images. Studying the pins that users have saved, the platform recommends similar images to them. Youtube does the same by analyzing what a particular video is about and recommends similar videos based on the metadata associated with every video.

Machine learning is on the way of revolutionizing social networking app development. The most common function we can see though is content moderation. The algorithms behind each application need to written once, post which the systems learn from the large amounts of data that they are fed.

The question that arises now is that “how can ML revolutionize social media applications?” It is evident from the uses mentioned above that ML can be used not only for the benefit of people but it can be used for destruction as well. Invasion of privacy is one of the major concerns, in turn reducing their safety and security.

Since ML is extensively used for content moderation, it could probably be used to somehow track those malicious conversations happening somewhere on the internet. Already used for blocking trolls, the technology could be used to make the conversations on posts healthier and prevent plagiarism of original posts.

Child pornography or removal of content posted without consent could be another application. Using face recognition to identify faces that may have been recorded on surveillance systems for breaking the law can also help catch those who are absconding.

Social media in some form or the other is one vast place where everyone is present. Leveraging the power of ML to either optimize the experience to solve problems would require the same amount of effort required to cause destruction. The decision and choice lie with those writing the algorithms behind the scenes and making it happen.