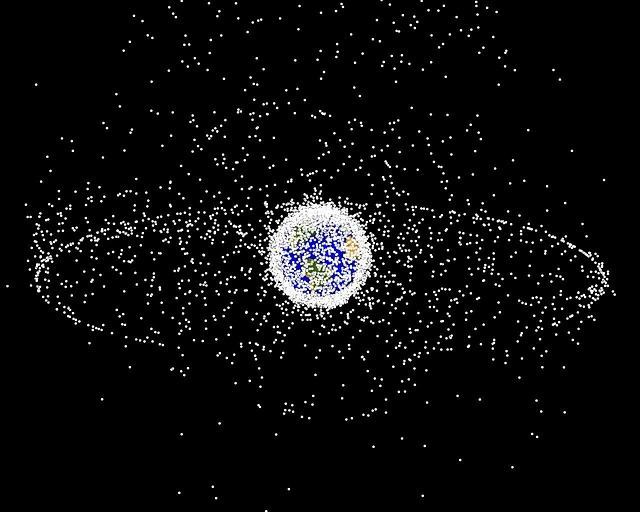 Space which once seemed to be an empty place now gives us a picture full of hustle. It is getting crowded, and that’s ever-increasing. While we are marking significant achievements in space research and technology and leaving behind our footprints up there, we are also leaving behind much junk.

Before 1980, the term space debris was referred to all the naturally occurring debris such as asteroids, meteoroids, and comets found in space. However, as the human efforts of reaching the space has continuously increased, the term “space debris” is being referred for all the artificial, non-functional, human-made objects orbiting the Earth.

Space debris is the junk that is left behind in the space in the form of failed rockets, to the fragments of satellites during disintegration, dead satellites, broken nuts and bolts and flecks of paint from a spacecraft. Most of it is present in the Earth’s lower orbit , i.e., within 1,200 miles of Earth’s surface and some of it is also found in the geostationary orbit, i.e., 22,200 miles above the equator.

Space trash can be as large as a truck or can also be as tiny as a microscopic flake of paint. Researchers estimate that there are about 130 million pieces of junk that are orbiting the Earth’s atmosphere. However, the fragments that are larger than 4 inches (10 centimeters) pose maximum threat.

As per the research conducted by the United States Space Surveillance Network, there are about 22,300 fragments of space debris of size larger than 4 inches. Approximately, 9,00,000 fragments having a size between 0.4 to 4 inches (1cm to 10cms) and millions of fragments smaller than 0.4 inches (1cm).

The fragments orbit the Earth at a speed of 8 km per second (1800 miles per hour). Attaining this speed, even if a tiny particle collides with a spacecraft can cause massive damage to it.

There are several cases in which the windows of the space shuttles were replaced as they were damaged due to the collision with space debris smaller than 0.04 inches (1mm).

What can now be done to clean the world’s largest garbage dump (i.e., the Low Earth Orbit)?

To make sure that the problem of space debris doesn’t get worse and at the same time to take measures to clean the preexisting tons of space debris, space companies have started to develop de-orbiting satellites, that would de-orbit one’s their mission is accomplished.

Active space debris removal technologies — nets, harpoons, and drag sails are being used to reduce the number of debris in space.

JAXA, a Japanese space agency is in the process of testing an electronic space ship that would be as large as six football fields. This electrified line known as electrodynamic tether (EDT) is 2,300 feet long and weighs 44 pounds is expected to knock debris out of the Earth’s orbit to the Earth’s atmosphere where they would be burnt.

A Canadian space company, NorthStar Earth and Space, is planning to send 40 satellites to the space that would be used to monitor and track the space debris using the combination of optical, infrared and hyperspectral sensors while their software will analyze the data and predict any potential collisions.

This space agency is adopting the concept of tracking objects in space to reduce the chances of their collision.

The other proposed methods for removal of space debris are, an ion-beam shepherd method using two ion-beam sources, a laser-ablation-induced material ejection from the debris and by using robotic arms.

To overcome a decade long problem of space debris, measures need to be taken.